Homeopath and functional medicine nutritionist Bryce Wylde was determined to get to the root cause of his beloved mom’s Alzheimer’s diagnosis in 2018. 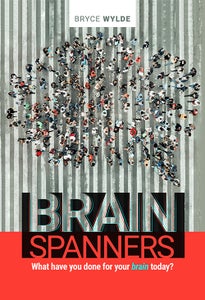 “It turns out my mother had a toxic form due to environmental exposure,” he says. “She grew up on a sheep farm that used a lot of pesticides, and she was exposed to some heavy metals that we found. It gets complicated, but once we understood and determined the underlying issue we were able to better address it.”

The Toronto-based associate medical director at P3 Health became inspired to feed and detox his own brain to reduce his disease risk, and then to incorporate such “brain-centric” strategies into his clinical practice. “I started getting excited about the brain and looking at brain diseases and how to apply functional medicine to different states,” says Wylde.

This “deep dive” also led him to pick the brains of other leading health experts—including doctors Mehmet Oz, Andrew Weil, Daniel Amen, Bill Sears, Julian Bailes, and Dale Bredesen—in interviews for his tip-filled new book Brainspanners: What Have You Done for Your Brain Today? Brain span is “one step up from health span,” says Wylde. “You live the longest life possible with good health and full brain function. A brainspanner is someone who jumps on board to do just that.”

Everyone Wants to Know …

BN: How did your experience with your mom’s Alzheimer’s influence your interview with Dr. Oz about his family risk with the disease?

BW: Our conversation was deeply rooted in genetics because I’ve read and interpreted his genome. We’re concerned because his mother did express (the risk gene) ApoE4 and he wants to know what his level of risk is relevant to his genetics. He has a very rare combination—he’s got the ApoE4, but he’s got also a 2. The ApoE2 gene is protective, whereas the 4 is deleterious. In a way, and this is oversimplifying, it kind of balances itself out. But we started talking about detoxification pathways, hormone pathways, all of which have a genetic susceptibility factor. The conversation was centered around that and what we would want to do respective to those genes.

In my case, I don’t have the ApoE4 variant, nor does my mother. But you can be exposed to a lot of toxins like she was, and not have the ApoE4 genetic variant, and still develop Alzheimer’s.

BN: Dr. Oz tells you that, because of his genetic risk, he needs omega-3 fats and folic acid, has cut way back on meat, and is getting more sleep. How can nutrigenomics, the science he’s applying in his own case, help regulate gene expression?

BW: The fact is, you cannot change your DNA. But you can manage genetic expression by virtue of diet, nutrition, lifestyle, exercise, and supplementation. My area of expertise is taking ingredients from food, often at much higher levels—the therapeutic range—and giving them to an individual to either up- or downregulate genetic expression. So in some cases, we might want to upregulate a hormone expression more in someone’s favor, in some cases a vitamin D expression, in some cases we want to improve detoxification. There’s often a nutraceutical, something from nature, a botanical, herbal extract, or food extract, that we can introduce to their system and give them an advantage.

BN: Why do you call glutathione—essential to detoxifying brain cells—“the most important antioxidant in the body and for the brain?”

BW: The brain has a different mechanism of detoxifying. We have the lymphatic system in the body. They lymph helps with the immune system and gets the junk out. But that doesn’t exist in the brain. In the brain, it’s glymphatics—glial cells sweep up the mess left behind from the day. Everyone produces toxins and everyone detoxifies. The amount of toxins people produce internally and that they’re exposed to in the environment varies, and the speed and efficiency at which different people detoxify varies. So glutathione is the most important antioxidant in the body, bar none. And in the clinical research we see if you have a chronic disease, you’re low in glutathione. And whether you’re genetically predisposed to producing low amounts or you’re simply exposed to a lot of toxins in the environment, we all kind of need more. If you give glutathione back to an individual, they improve because their system’s ability to detoxify improves. But the glymphatics cannot work except at night when you sleep. And at night the brain has to have perfect conditions to detoxify.

BN: What are these ideal sleep conditions?

BW: You need good sleep hygiene. You need a dark, cool room, 68 degrees or so—maybe a little lower in some studies. And you need more than just the hours you clock on the pillow. The depth, the intensity that you sleep, is important for allowing your brain to rejuvenate and detoxify. If you don’t get that quality sleep, your brain won’t throw out the trash.

BN: Any other tips to help our brains detoxify?

BW: Detox tip number one, actually, is to supplement with Glyteine to boost glutathione levels. When you supplement with glutathione, it’s going to float around outside of the cells—though it’s supposed to get into the cells in order to protect the mitochondria and to help you detoxify brain and body. Glyteine is invited into the cell, and then within 60–90 minutes—as human clinical trials prove—it goes to work to increase levels of glutathione. Glyteine will help improve memory because it will get rid of the stuff that’s impeding memory.

And then after sleep hygiene, thirdly, anything you can do to stimulate both heat shock protein and BDNF or brain-derived neurotropic factor, will help indirectly detoxify your brain. Vitamin D, sunshine, and exercise can all stimulate neuroplasticity and neurogenesis, which leads to healthier brain cells and memory. In some cases, it’s as easy as taking a contrast shower (alternating hot and cold water), which stimulates the vagus nerve in the brain into neurogenesis.

8 Ways to Detoxify and Activate Your Pineal Gland